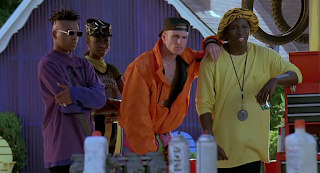 "Goin' up the scale and I will prevail
Sharper than the point on the tip of a nail..." 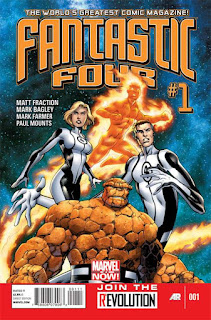 Wasn't there a new 'Fantastic Four' like a year ago? Are we reaching a 'Fantastic Four' singularity? Will every 'Fantastic Four' issue soon be a #1? Will the artists keep deteriorating ? How much lower can we get than Bagley? Who? Will the next 'Fantastic Four' #1 be drawn by? a blind autistic elephant with a mangled trunk? THE MAYANS PREDICTED THIS! W E ' R E A L L G O I N G T O E V A P O R A T E I N TTTTT OOO S P A Cccccc E A N DDDDD T III M EEEEEEEE ! ! !

Anyways, this comic is terrible. 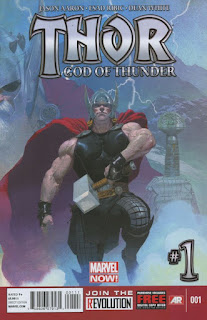 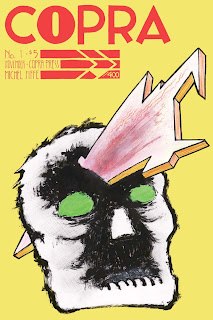 Besides being a great toss up to the 'Suicide Squad' with psychedelic overtures not seen since Grant Morrison's 'Doom Patrol' and Peter Milligan's  'Shade, The Changing Man', 'Copra' also features production values that outshine everything else in comics, from the art comics with a print run of four to deluxe edition reprints from major publishers, you'll find nothing that matches the sheer quality as a reading object as 'Copra'. Pick up a $4 Marvel comic and then 'Copra' and try and figure out where the extra money went, the answer will inevitably be Ike Perlmutter's pocket. 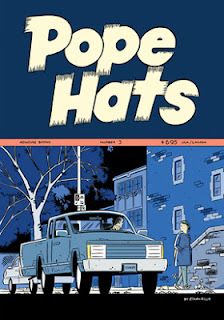 It's nice to read a book that you know in three years, when its out as a nice collected edition, will be the de-facto "book that everyone will recommend to their non-comic reading friends" and unlike 'Blankets', it will actually be good.

'Cody' reads like a DeForge diss track only instead of going after one creator he sets his sights on every person in the medium and shouts out "I made this shit up panel to panel. GET AT ME???" and when you put 'Cody' down, and DeForge drops the artistic mic, you know no one can, because if this is DeForge fucking around then what happens when he's not?* 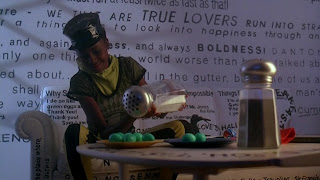 and because I couldn't even be bothered to do this half-assed column by myself, here's a guest review from Mr. Rick Vance ... 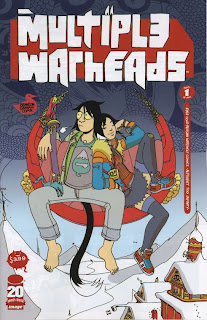 This comic feels like 'The Airtight Garage', and I know that isn't enough to talk about but it should be.  It is science fiction of the best kind, not about explanation but about natural cohesion of environment. This is a world that feels like it was both planned and created on the fly at the same time. All of what I have said is what I was expecting, however what I wasn't expecting was the second story that intertwined with the travelogue of the main characters. The bounty hunter swashbuckling story felt right out of Miyazaki's "Nausicaä of the Valley of the Wind", it had weight but felt airy and kinetic, and full of incredible motion.

There was a single panel in 'King City' of Joe using his Cat almost like a sword which almost previewed what a Brandon Graham fight scene would be like but the full color realization of that promise was amazing. The fact that half of the book is a comedic travelogue and half of it is sword fight it almost shouldn't work, but the secret glue of all of Graham's comics is the puns, they are everywhere so the world feels interconnected even when it otherwise shouldn't. On top of everything else said this thing is 48 pages for 3.99 and transitioning from this to other weekly comics you immediately feel the difference of the page count and the ability he has to lay out his world and design every aspect of this comic to where he wants it. 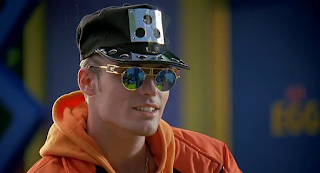 "As soon as you're done making sex? "
-------------
A continuing series of reviews/essays/thoughts on the anthology 'Thickness' 
Every entry in 'Thickness' #2 would in a lesser anthology be an issue defining story, but here it's difficult to think of anything being a stand out when you look at the contributors involved. That said, still Michael DeForge's 'College Girl By Night' does just that, because even in a master's class someone has to set the curve. 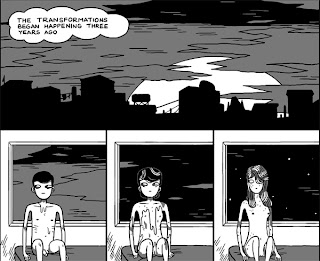 In 'College Girl By Night', DeForge takes the principles of EC Comics (or the lingering perception of what they were) and reinvents them for the modern day, stories of space epics or monster tales give way to DeForge's brilliant take on werewolves as a source of discussing gender identity. The transformation into a werewolf has always been explored as an aspect of the beast within man, but DeForge inverts this idea into the woman inside man which in turn allows a whole new dimension of the story to be explored. DeForge goes even further though, adding allusions to internet culture, social media, and commenting on the indecisiveness of college and planning for the future (does he want to date someone in his female form? Start a life with them? What will he/she look like in twenty years?)

'College Girls By Night' is just eight pages, but the ambition of the story puts it alongside any of the great "OGN's" in both emotional weight and thematic resonance, in less pages than many take to say a character's name. 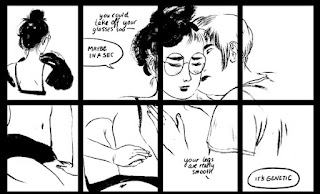 Angie Wang's 'Untitled' is a beautiful entry, in any anthology, but what separates it from the rest of the book is it's use of action comic techniques to represent sexuality. It is impossible to look at Wang's use of the panel grid and not be reminded of a Kirby-esque action sequence, each action and movement becomes larger and more kinetic as the panel grid is stripped away (a sixteen panel grid gives way to a nine, which gives way to a four, etc.), at all times building towards a single page climax.

What Wang does though, to distinguish her story from the overcrowded field of action comics, is instead of using this technique to tell the story of two men clobbering each others brains out, she tells a small and intimate story of two women making love. It is awkward and fumbled at first, restricted by the claustrophobic sixteen panel grid, but as each character becomes more familiar with each other the pages open up and their actions become more free and natural.

In tandem with these sequences, Wang uses her dialogue to further connect with these classic fight scenes, as the action escalates each character's dialogue devolve from articulate sentences into short single word bursts and finally into abstract symbolism. 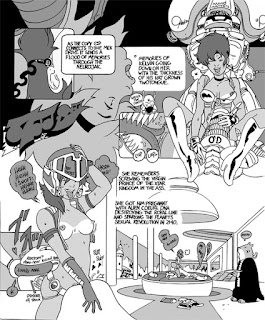 In 'Dirty Deeds', Graham goes all out with his puns turning every aspect of the page into an elaborate joke, from background gags, like a robots decals reading "Sex Million Dollar Mech" to making the page layout itself sexual innuendo. Graham's previously published works of pornography ('Perverts of the Unknown', 'Multiple Warheads', and 'Pillow Fight') were always constrained because of their explicit need to be pornography first and foremost, but 'Thickness' (while being a collection of pornography) does not have the same editorial goal in mind allowing Graham to condense every pun that you would see in 'Perverts of the Unknown' into a single page of 'Diry Deeds'. 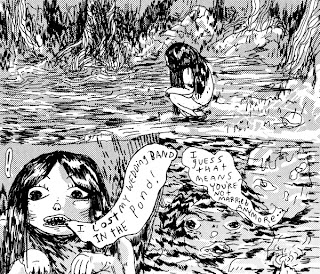 This is how Mickey Z opens her story of a temptation, a murky narrative that seems to just flow from page to page, always going somewhere, but never being forced or contorted to reach that end. 'Slime Worm' is simply that, it slimes and it worms its way to an end, illustrated in a watery, almost intangible style pushing the boundaries of what actually constitutes a grid.
---------------- 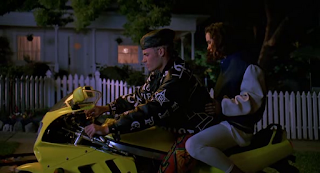 A rap oriented remake of "Rebel Without a Cause" with heavy emphasis on the fact that rap star Vanilla Ice has assumed the James Dean role.
--------------

A odd moment of shared contempt broke out when i told Alec Berry, Joey (HARD TO SPELL ITALIAN LAST NAME), and Chad Nevett over Skype that i had no clue who or what a Steve Rude was. It's weird what people hold sacred. 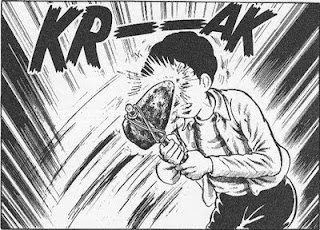 'The Drifting Classroom' seems to have no qualms with violently disemboweling or setting aflame small children at every opportunity. No rain? Lets crucify this kid. Might have the Plague? Burn him alive. Being a plain old dick? Nothing a rock to the face wont solve.

I was very pleased when the guy behind me in line for beer informed everyone in shouting distance that he was fine with waiting since he had just done a bunch of pills.

Even though i have no childhood connection to Carl Bark's 'Donald Duck' comics, picking up the second volume of Fantagraphics' reprints just causes this immediate resonance. Maybe his artwork is just so built into the public iconography that everyone is exposed to it during childhood without knowing it.

Fun Fact: The total population of West Virgina is less than the city of Boston.

I guess Marvel is reducing the number of "Premiere" Hardcovers they produce, which is good news. The only thing Marvel's "Premiere" collections are the premiere of is shitty over priced money grabs.

As others have pointed out, the finals chapter of 'Marvel Comics: The Untold Story' just kind of peters out. Howe skims the major events (which is essentially the Marvel Studios films) and calls it a day. I assume the problem is anyone who could provide him with inter-office gossip is still gainfully employed by Marvel and would wish to keep their job (which makes sense), but results in a weak ending to a great book.

Letting all those mediocre nu-52 books have a couple issues to find there footing before dropping the entire line has left me giving every one of those Marvel NOW! launch titles absolutely no leeway. 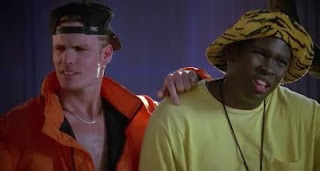 "I'm gonna go across the street and, uh, schling a schlong."
Posted by malpractice at 12:00 PM