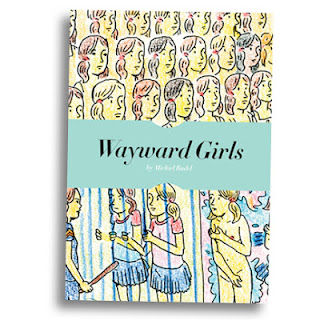 Interesting is the only word that can be used to describe 'Wayward Girls' in it's crayon-inspired color palette; its narrative that fluctuates between meandering sequences of nothing to jump cutting through entire plot lines between panels; its dialogue, a mixture of broken English and school girl inspired symbolism. 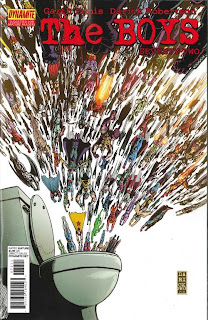 Garth Ennis is one of the few writers in comics who knows how to write an ending, nothing he does is terribly shocking, theirs no last minute twist, no last page revelations (it wasn't aliens all along), just a satisfying conclusion. Constantine and Cassidy are still  fuck ups, Jesse and Tulip ride into the sunset, Tommy runs out of friends and luck, and poor Wee Hughie will carry on.

'The Boys' ended how it had too, how it was always going to, it ended how it should have, and not many besides Ennis can achieve that. 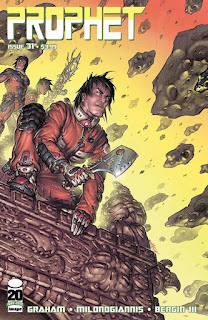 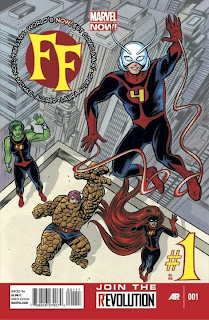 Things i liked about this issue

. How Mike Allred draws The Thing like Jack Kirby.

. How Mike Allred always draws Reed Richards (Mr. FANTASTIC!) at all times stretching. I finally get why they call him "stretch!".

. How Mike Allred draws The Inhumans.


. Those scenes when the kids were talking were ok...i guess. 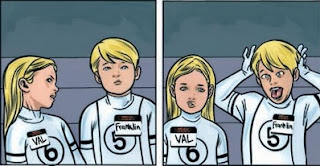 . The page that showed Mark Bagley art in the back. Ekk.

. "Hey guys we're only going to be gone for four minutes, OK?" "Just four minutes!" "like 240 seconds, that's all" "Four Minutes!!!" I FUCKING GET IT, THEY WILL NOT BE BACK IN FOUR MINUTES BECAUSE THIS BOOK WOULD ONLY BE SIX ISSUES LONG IF THAT WERE TRUE!!! 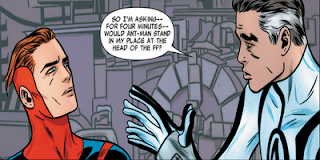 Did you know Ant Man's daughter died? I didn't, but even so, i didn't need to be reminded every three pages.

A continuing series of reviews/essays/thoughts on the anthology 'Thickness' 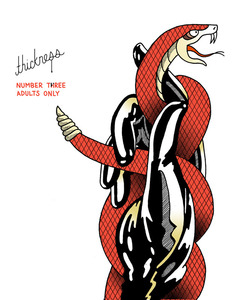 
The third issue of 'Thickness' is the harshest of the series, the most direct, the most visceral, the most distilled; in a series where nothing has been off limits 'Thickness' #3 pushes that idea to the outer limits. Forcing the reader to see what happens when you strip the previous two issues genre blending, along with its melding of fetish and humor away and focus on a singular attribute. 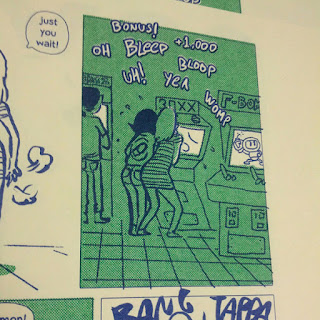 'Thickness' #3 opens with a humor strip, one of the funniest of the series, Lamar Abrams '30XX' is both a play on the Scott Pilgrim aesthetic of the past decade along with a re appropriation of a a weird moment in arcade history where crass pornographic machines were produced for general use (to a complete failure).

Fucktron, who's joystick is a quite literalized penis, becomes the Ms. Pacman of a small Russian arcade where two girls try and beat each other's high scores, eventually unlocking a series of hidden compartments where they (along with two others) proceed to play multiplayer mode. 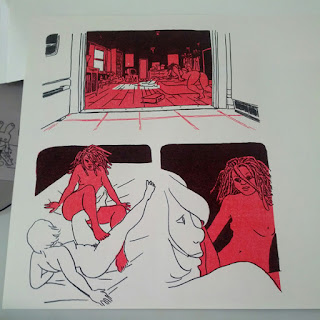 'Protestploitation' opens with a splash page; two females kissing, surrounded by the signs of their past and future protests, in a dilapidated apartment. Everything (including each other) exudes passion, the poster in the apartments background "La Beaute Est Dans La Rue" (the beauty is in the street), the exposed brick walls are saturated in a deep and unrelenting red...

Jimmy Beaulieu's use of red ends up being the main takeaway from this comic, the story is ultimately innocuous, beautiful but innocuous.

The single choice of color though forces Beaulieu to use it both as a piece of symbolism to bring the reader closer to what the characters are feeling, but also as a way to create dynamic pages. A nineties tinged scene where both females hand paint each other in red before leaving their apartment to protest, creates a series of striking and singular panels, but also calls back to the first pages passion, as each touch leaves a trail of red. 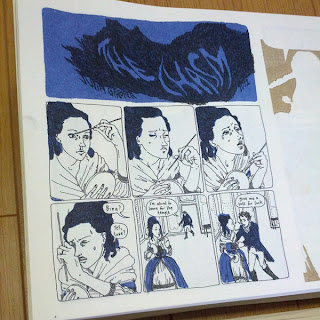 Opening on Bina applying makeup, a short moment of sorrow breaks through as she suddenly and briefly breaks into tears, before her husband (unnamed) excitedly enters the room. He's explains that he’s going to "Temple" to discover "The Box", a thought Bina describes as "heathenous", a decidedly pointed reinforcement of Victorian norms on her end (especially in the wake of the previous scene), but he goes anyways, cockily strutting out of the room.

The "Temple" is an elaborately designed Victorian building, with a naked, masked, female sitting on a chair in the center of a large hall, aided by another (naked, although unmasked) servant who applies fruit juices (which she gathers from the tree’s outside the home) to her nether regions (a, unsubtle, attempt at replicating “wetness”).

Our male lead takes his turn (following a line of similarly attired men). As the man begins performing oral sex his conscious begins exploring another Victorian mansion, moving room to room searching for the box, but once he is near he's tugged away. Bina will continue to suffer. He and the men though (in a "Salo"-esque scene) relieve themselves into a cup. 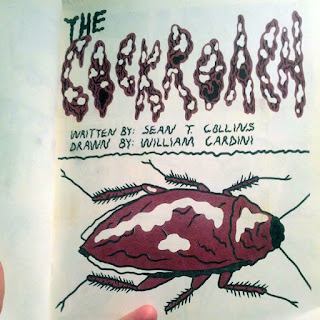 Sean T Collins and William Cardini's 'The Cockroach' has a coldness to it that is absent from the rest of the anthology. Focusing on an unnamed male trying (and eventually succeeding) to kill a cockroach, that is scurrying around his hotel room, to alleviate his girlfriends fears.

While the first few pages provoke a masculine (if not slightly homoerotic “POKE, STAB, JAB”) fantasy of killing the unknown, always in the process of impressing a female, the lingering point of this story is the battle between life and death, biology and violence. 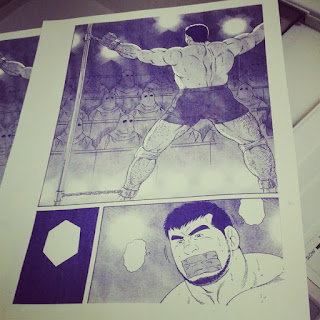 I remember going to see "Hostel" as a sophomore in high school and being scared to death, the TV spots advertised it as one of the scariest and goreiest films ever made, and then i remember sitting there and feeling nothing besides disgust at how terrible of a movie i was watching. Gengoroh Tagame's 'Standing Ovations' though, a little less than a decade later, is what my fourteen year old self thought he was going to see. 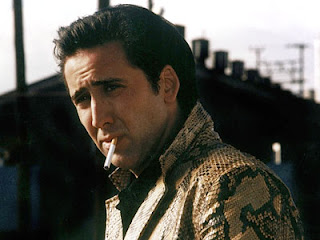 "Did I ever tell ya that this here jacket represents a symbol of my individuality, and my belief in personal freedom? " 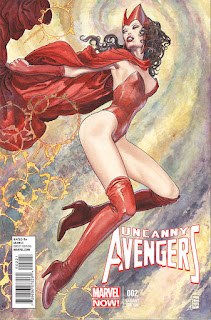 I like this cover, not so sure about the contents inside.

Connor Willumson dropped this gem to run against the new issue of 'Wolverine MAX'. I don't even have to look to know which was the winner.


Karen Berger leaving Vertigo is devastating to a line that's been on life support for the better part of three years. She is responsible for far more of my comics collection then i feel comfortable admitting, along with me moving past simply buying DC and Marvel comics. I hope she finds work at a place that appreciates her and doesn't try to poison every relationship she has ever established with a creator. 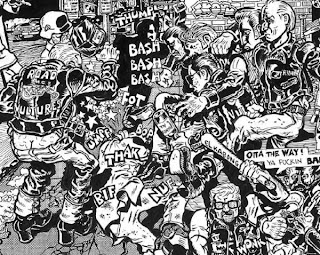 Spain Rodriguez died Wednesday morning, I haven't read any of his work, but what few images I've seen makes that an embarrassing thing to say. I will try and remedy that soon.

I understand that the "mainstream" makes other comics...but besides Brandon Graham, what's actually worth reading? 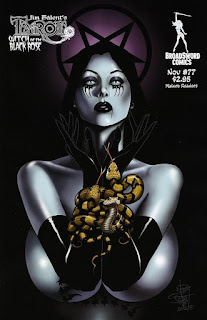 Gilbert Hernandez did a guest cover on 'Tarot: Witch Of The Black Rose'.

I like how Chad Nevett has taken a "fuck it all" approach towards the last few months before his "retirement" later this year. This week's Random Thoughts makes explicit a conversation that was only hinted at in The Splash Page Podcast. 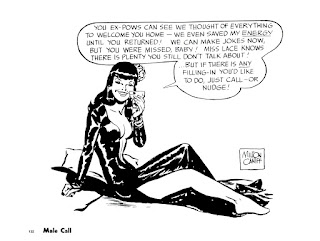 So when is Dustin Weaver going to finish the second volume of 'S.H.I.E.L.D.'?

Those preview pages of 'Avengers' #1 look nice, can't wait to be disappointed when it comes out. 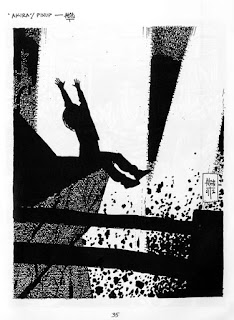 Aaron Sorkin's 'The Newsroom' is the most devastating and vicious satire of the left ever conceived. It's just that no one involved with the production seems to know that.
Posted by malpractice at 11:59 PM